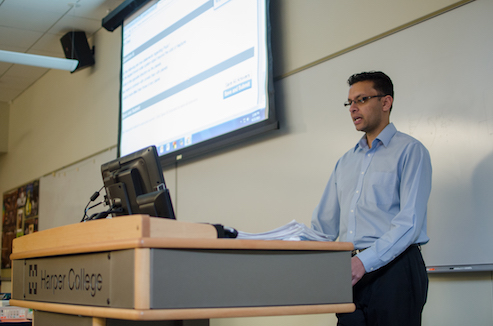 Bhasker Moorthy – who immigrated to the US with his family at the age of 11 from India – was awarded one of our inaugural scholarships. When he applied, Bhasker was a senior at Seattle’s Cleveland High School, which in the 1990s was singled out for having the lowest student test scores in the Seattle School District.

During his 1996 interview with Education First’s founders, he said that he wanted to be an astrophysicist. We weren’t sure how serious he was… but he sure knew his stuff! Our scholarship helped him pursue a higher education, and now he works as a professor of Astronomy at Harper College near Chicago.

Nearly 20 years after receiving his Education First scholarship, Bhasker recounts how much his scholarship meant to him. In the following interview, he shares why he supports Education First through a monthly donation, and offers important advice to low-income high school students embarking on a college education.

What is your background?

“I grew up in India. My parents had gone to college and had good jobs, but they left it all behind to move to America. Here, they worked for minimum wage, and we lived in low-income neighborhoods. My middle school and high school were not known for high academic standards. Financially, we weren’t in a great situation, but I had a sense of what I could aspire to. A lot of kids I grew up with in Seattle did not.”

Why were you interested in pursuing a career in astronomy?

“A lot of kids like space, and I was like that. I suppose I was more stubborn or naïve than most. In fact, I declared astrophysics as a major without ever having met an astronomer. My parents were concerned about me pursuing a career in astronomy, and wondered if I would be able to get a job.

Prior to my interview with Education First, an article had come out saying the Big Bang happened later than previously believed. One of the interviewers brought this up and intentionally changed ‘later’ to ‘earlier’ to see how I would respond. It so happened that I had been following this, and so I said ‘I read it was the other way around.’ I learned later from [Executive Director and Co-founder] Chris Bryan they had been testing me to see if I really was into astrophysics, or was just making that up.”

Was there someone in your life who inspired you to dream big?

“My parents, who were willing to leave a good life and start over. At times they earned less than $1000 month, but they still prioritized my education. Also, my uncle and his wife – who are both doctors – were already established here and had sponsored our immigration. They were almost like second parents to me, and I looked to them in adapting to a new culture. They always pushed me academically.”

Once you got to college, what were some of your biggest challenges?

Culturally, I didn’t fit in as well with my physics leaders and had to figure out on my own how to succeed. There were some things I could have done that I didn’t know about, like applying for summer research projects. I didn’t have proper advising and so didn’t know when to take what class.

I also should have surrounded myself with the best students, but I tended to surround myself with people I felt most comfortable with. I didn’t feel like I fit in with most of the students at the UW. My high school was full of minorities and children of refugees. Once I learned to put academics first, I finished college in 3-1/2 years, despite having a double major. If I had known better, I would have taken my time and performed better in my classes.”

How do your experiences help you relate to the college students you teach?

“I think having been in positions of privilege and positions where I didn’t have privilege helps me relate to most of my students. I know what it’s like to be disadvantaged, so I can relate to students from disadvantaged communities. Additionally, I can also understand the ones who aren’t disadvantaged and having trouble figuring out why they aren’t doing as well as they should.

“I’m involved in a lot of international and multicultural initiatives. That’s because when you are from a subordinated group – if you’re the first in your family to go to college, if you’re not in a great financial situation, if English isn’t your first language – you face obstacles that the dominant group is completely unaware of. It’s a privilege they enjoy, not having to learn about anyone else. But it also is a barrier for them that divides people based on the groups they belong to.”

Why is it important to you to give back to Education First?

“While today Education First’s scholarships pay more than the $1000 I received back in 1996, it’s the $1000 that I value the most. These three guys [who interviewed me] had recently graduated from college, and they were already thinking about how they could give back. Fresh out of college, they created a new scholarship program in three different cities, traveling around and raising funds on their own. I knew that when I was in a position to give small amounts to Education First, I would do so because I was so inspired by the initiative they took. Now, 20 years later, they’re still doing it, even with jobs and other responsibilities.”

Do you have any advice for high school students who are in the same situation as you were?

“Whatever you think you want to do, pursue it. Don’t let anyone tell you that you can’t do it. But make sure you know what it is really about. The one thing I should have done was to try to actually shadow people that had the job I wanted. Perhaps contact 10 people, and maybe one of them will let you in on what that life is like, the pros and cons in that particular field. Have a long-term goal, but break it down into small steps. At the beginning of each semester, think ‘What should I do?’ It’s important to have long-term goals, but it’s OK to keep evaluating why you’re doing what you’re doing. Is it status? Is it money? Is it passion? Because it’s something you’re going to be doing every day.”